During the 1980s and early 1990s the initial concerns around mundic block within houses in Cornwall and West Devon resulted in the refusal of many mortgage companies to lend money to any house built from concrete between 1900 and about 1950. The vast majority of these houses were needlessly blacklisted but ignorance of the causes behind mundic block degradation hampered policy makers.  The release of the initial mundic guidance by RICS in 1994 returned ~70% of these affected properties onto the approved lending list. Following recommendations of the 2nd edition of the mundic guidance (1997) that percentage increased to ~80%.

This article is the second of two posts and in it we explore the main changes that have occurred between the 2nd (1997) and 3rd edition (2016) of the mundic guidance (effective 1st January 2016). The 3rd edition of the mundic guidance clarified some of the terminology being used (Class A, B & C) along with the sampling protocols used by surveyors. However, it also incorporated several minor changes to the assessment of potential Mundic block that had developed over the intervening period. The cumulative effect of these changes were to give more options to home owners and surveyors to pass concrete as stable (after stage 2 or stage 3 assessment) if there was sufficient evidence to do so.

Density test clarifications: The development of the density test started before 1997 and applies particularly to mass concrete footings made with mine waste (Group 2-2) aggregate. It was in place for the 1997 edition with some minor amendments subsequent to that. The current upshot is that for mass concrete footings, regardless of aggregate type, it is possible to obtain a Class A classification if the concrete is well made (i.e. aggregate is well graded, without too many “figs” and with low void space) and sufficiently dense (>2000 kg/m3 for a compliant sample). The density test is generally only applicable for footings samples and most mortgage companies would not accept or surveyors recommend a density test for mass concrete in the walls. 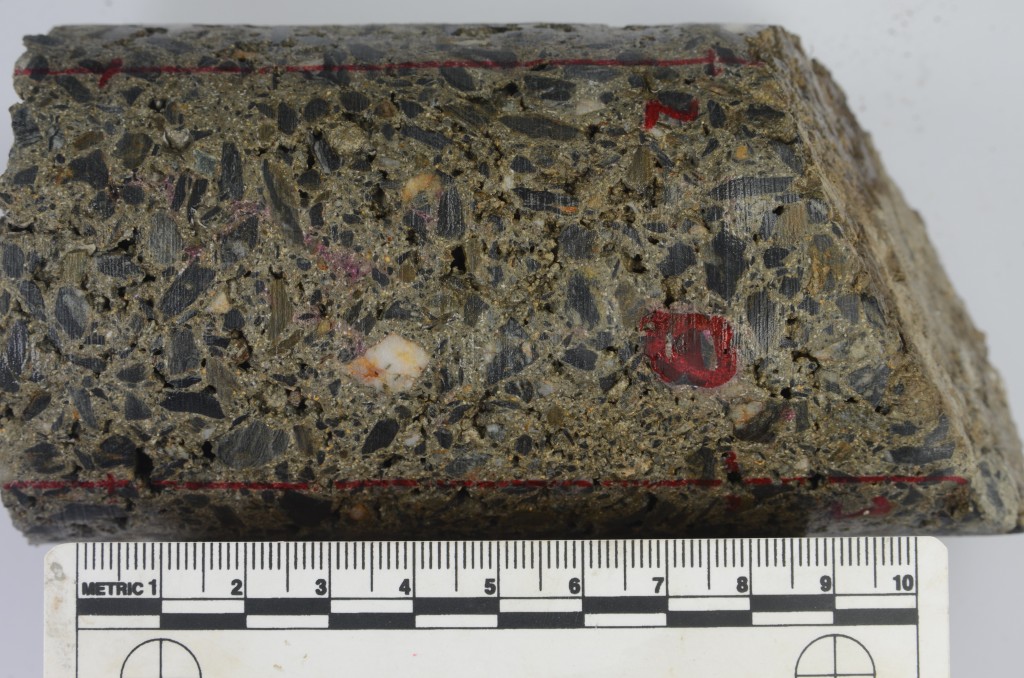 An angled 75 mm core containing pelite mine waste that has been marked up for a density test.

Sulfide limits for Granite Mine Waste: The upper limit for permissible sulphide content in granite mine waste was raised to 1% in 2003. This only applies to granite mine waste and is only effective if there is no evidence of in-situ aggregate alteration at the microscopic level, or of concrete degradation at the structural level. The aggregate material must also be essentially quartz, stable silicate and stable oxide phases. 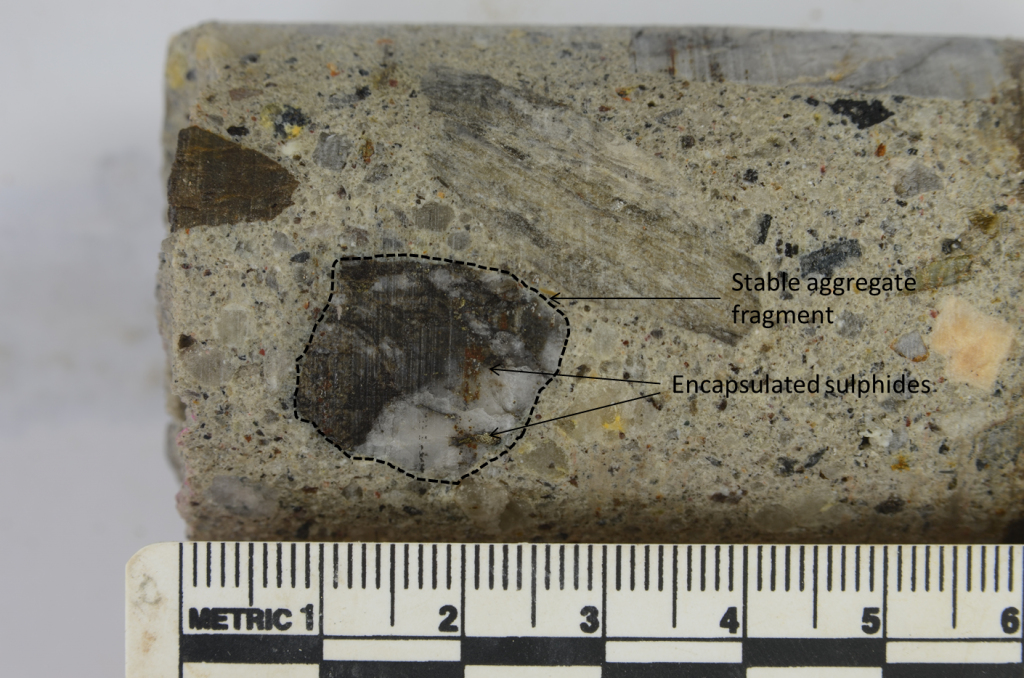 Pyrite and chalcopyrite encapsulated in stable aggregate fragment. The slight red staining is not in-situ iron-oxide formation but red brick smearing from the drill bit.

Miscellaneous Sedimentary Rock Classification: The use of sedimentary material was particularly common in rural areas and is often extremely local in nature, probably sourced from the material excavated for the building plot. Several general sub-types are observed (e.g. a chert rich variety from Lydford, Devon, and a type often mixed with beach sand near Newquay). Several were initially considered unstable, though by 1997 many of these had been recognised as predominantly stable (e.g. the use of Devonian Limestone). This was further extended in May 2000, when BRE expansion testing showed the essential stability of most sedimentary aggregate types. Now sedimentary aggregate types are generally considered stable, unless there is significant evidence of lamination-parallel spalling and/or suspected in situ oxidation of fine-grained framboidal pyrite (occasionally found in laminated mudstones around the villages on the North Coast of Cornwall and some of the mudstones near Launceston). 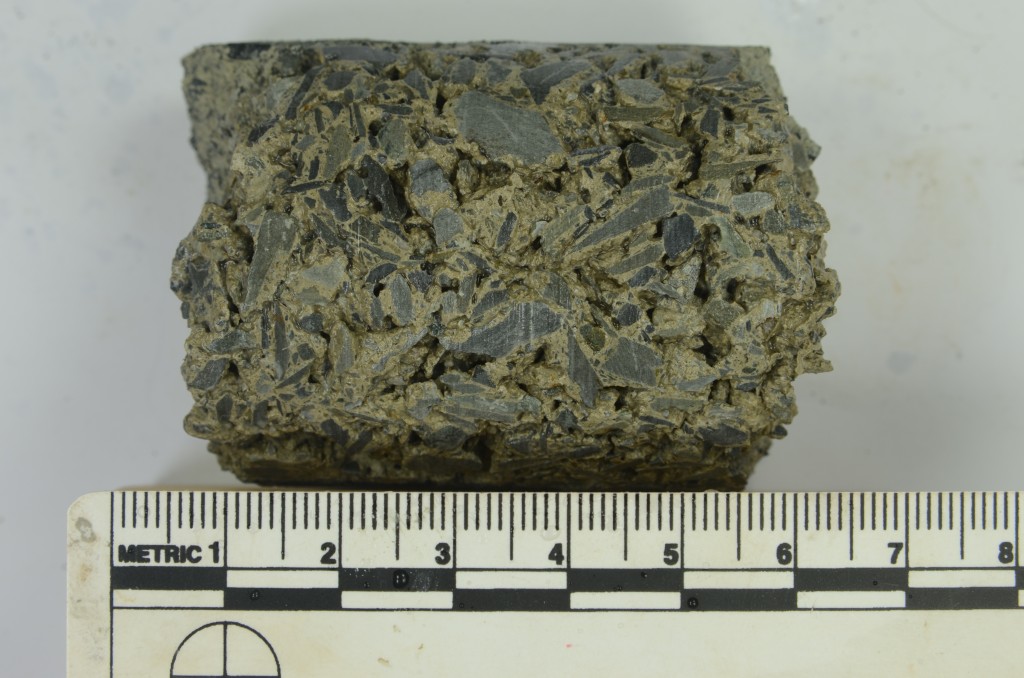 Concrete core taken from the walls of a house. The mudstone fragments are locally sourced and contain very few sulfides. This concrete is sound

Expansion Testing: The most significant addition to the Mundic guidance over the intervening years has been the option for an expansion test on concrete samples previously classed as unmortgageable but which currently show no significant signs of degradation, either microscopically or structurally. It is at least a 250 day test and measures the linear expansion of selected concrete cores in a controlled humid and hot environment. It is particularly suited to well made concrete block that has nevertheless been determined to be Class B (unmortgagable) by the Stage 2 petrography test, commonly because of the mixing of potentially unstable and stable aggregates where the resultant deleterious aggregate content was over the 30% threshold. Of the Stage 3 expansion tests undertaken by Petrolab, very approximately 60% of concrete has met the required criteria for re-classification to Class A. 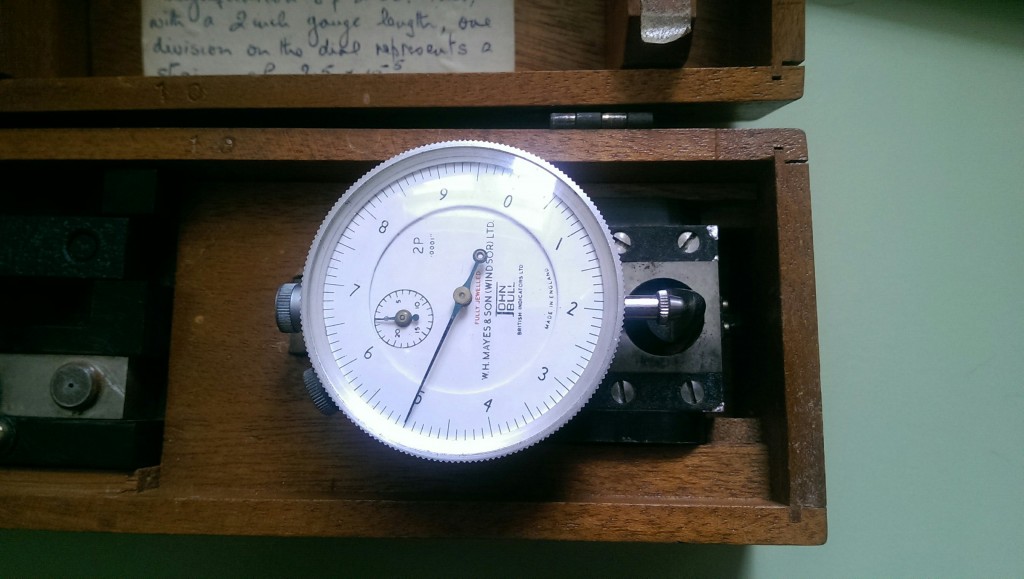 A DEMAC strain gauge used to measure the expansion of concrete cores during a Stage 3 expansion test. Picture courtesy of Dr Andrew Barnes from www.geochemic.co.uk

Many of these tests unfortunately offer no support to houses that already contain unsound concrete (Class C) or for which the walls in particular are built out of poorly made concrete containing  aggregate commonly known to be unstable (e.g. lead mine waste). However, the effect of the changes introduced with each successive edition of the RICS mundic guidance has been to reduce the number of properties that become needlessly blacklisted, and to allow more properties to become mortgageable even if it requires Stage 2 or Stage 3 testing to prove the stability of the concrete.