‘Mundic’ – The Good, the Bad and the Ugly 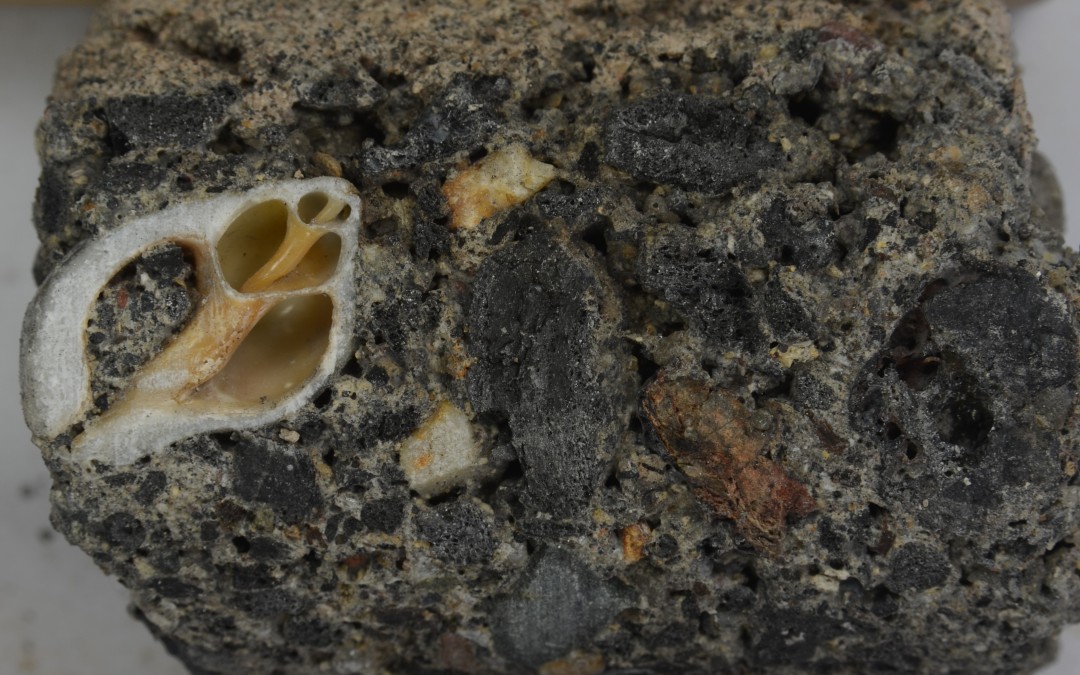 From the 1900’s to the 1950’s concrete used for the construction of domestic and small commercial properties in Cornwall and Devon was sourced from locally available aggregate materials (to save time and money).  These locally sourced aggregates could be highly variable and there are 9 recognized broad aggregate types rising to 40 when sub-types are considered, and this is without considering concrete made from combining aggregate sub-types – a practice that was commonly used. Builders showed great ingenuity in sourcing suitable aggregates, forming concrete from everything from beach gravel, to furnace clinker, to natural pumice though it was famously the use of  waste materials from the region’s metalliferous mining industry that became central to the problem of accelerated concrete degradation in the region (widely known as the ‘mundic block problem’).

Petrolab have been undertaking concrete screening tests for 25 years now and have seen a wide range of concrete types. The 5 below are some of the more interesting individual concrete samples or concrete types that we have seen in that time. 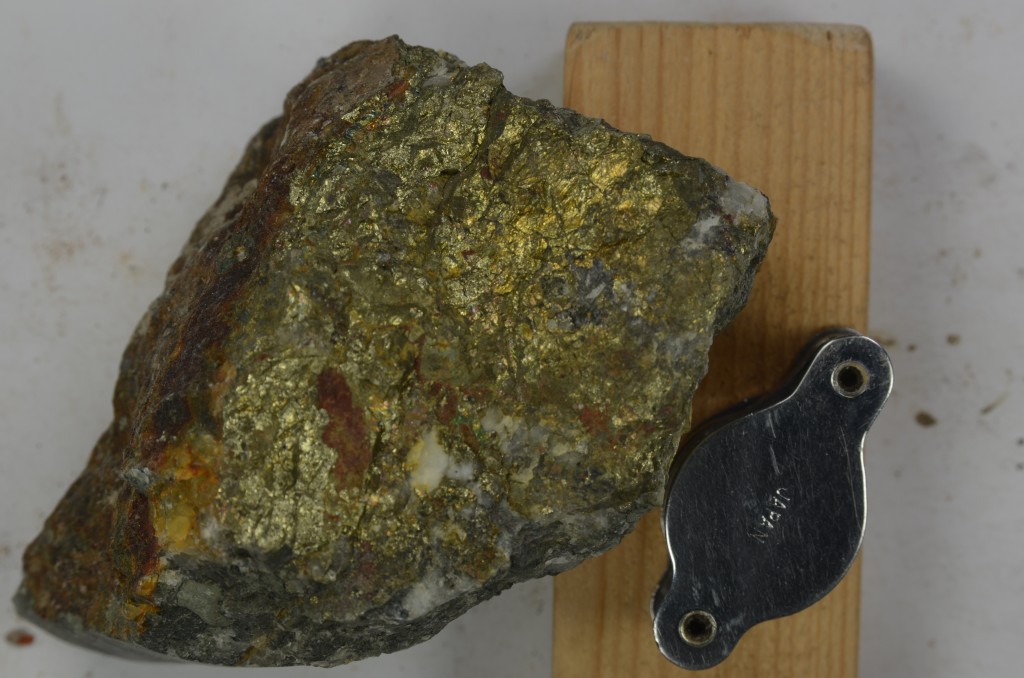 This large chalcopyrite vein was pulled from some shuttered concrete from a house in Camborne. The coarse-size of the aggregate and the obvious copper mineralisation spread throughout had made the concrete in question obviously unsound. The extent of ore-mineralisation throughout the concrete suggests that this could have been an old stockpile working into mass concrete, as opposed to mine waste. Sadly for the home owner this house would be unmortgageable. 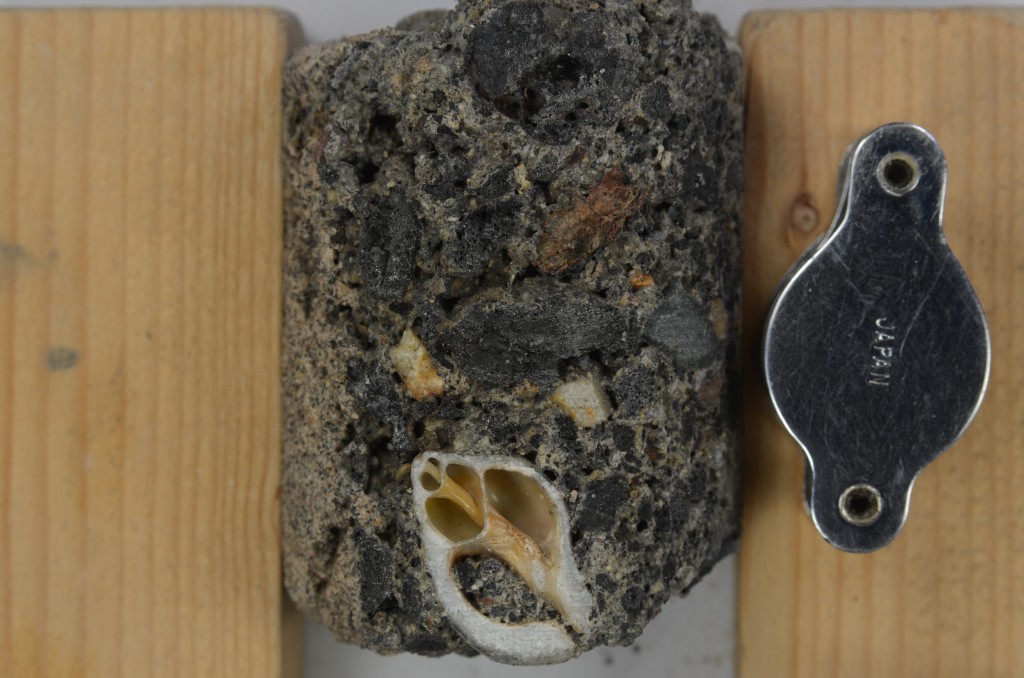 The use of beach sand to form mass concrete was relatively common practice for several seaside towns (e.g. Bude, Newquay, Looe). Generally a sound aggregate, it was nonetheless very rare to preserve shells as anything other than fine fragments only visible under a microscope. This specimen was taken from a property in St Ives and shows a beautifully preserved cross-section of sea shell. 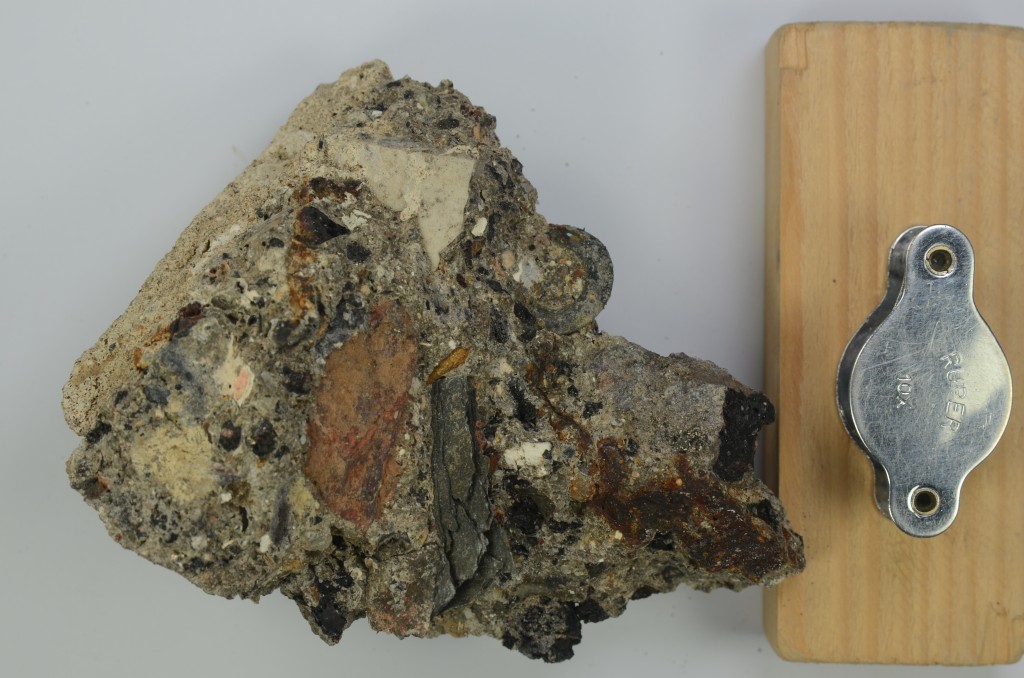 The use of incinerator waste material to form concrete was trialed in a few places (e.g. isolated parts of Falmouth) and generally this material forms unsound concrete with well-documented cases of severe deterioration. Incinerator waste concrete is also highly variable containing a wide range of ‘aggregate material’ including bottle tops, scrap metal, wood chip, and calcined fish skeletons. Occasionally this unusual  aggregate can nonetheless be considered sound and mortgageable if the aggregate type constituents are predominantly stable rather than reactive. 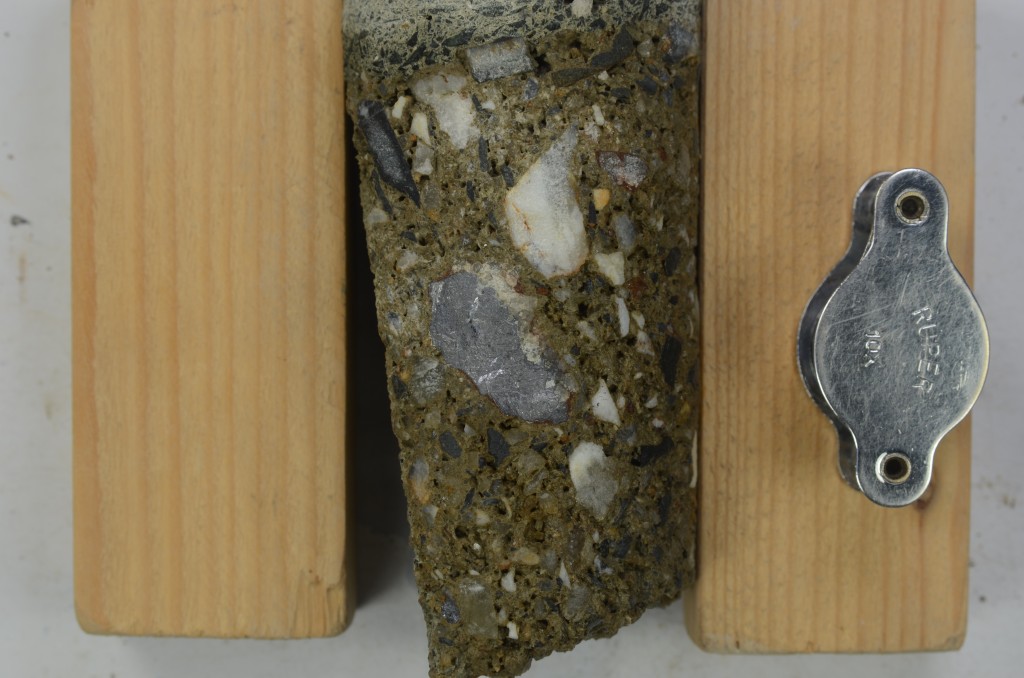 This was a locally sourced lead-mine waste aggregate from Wheal Mary Ann, near the village of Menheniot by Liskeard. The picture shows coarse silvery galena (Pb-sulfide) in the centre of the field of view. The lead mine wastes have been amongst the most deleterious for concrete degradation, known for frequent deterioration. Interestingly this isn’t related to the presence of galena in the mine waste (as above) but to the very fine-mudstone material which contains reactive framboidal pyrite that degrade the concrete binder. Regrettably houses with lead mine-waste are nearly always unmortgageable. 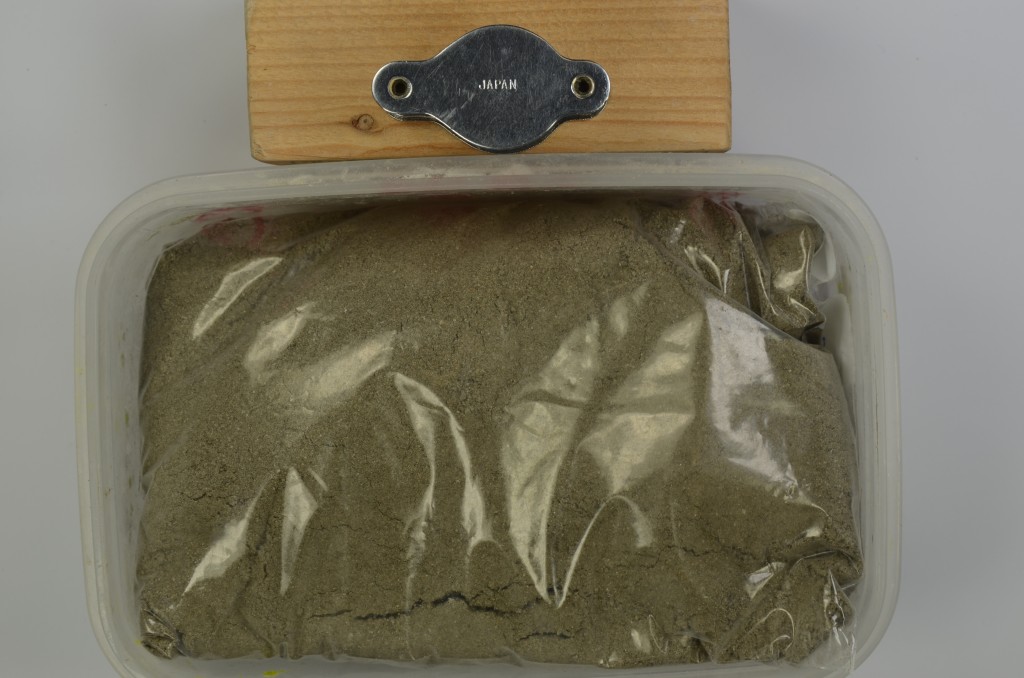 The picture above is ultimately the reason why these concrete screening tests became necessary. This bag of dust was taken from a building in a severe state of disrepair and shows what happens towards the end of the deterioration process. The breakdown of pyrite (‘mundic’) results in the production of acid that attacks and degrades the binder. Without binder the concrete becomes loose aggregate with no structural integrity. Ultimately the concrete becomes unsound and in most cases the building requires demolition.